Welcome to The Real DFG's Pittsburgh Penguin Autograph Project. My goal is to eventually try and get at least one autograph of every player to lace up the skates in an NHL game for the Pittsburgh Penguins. It could have been for one game or 700 games, I will add them. Occasionally I may post cards of former players in their new team uniforms. While the goal is to get autos in Pens uni's, it isn't always possible. Since the team has been in existence since 1967, the list is pretty large. Last I checked, it was somewhere in the range of 624 different players. Currently, I sit at about 100 autographs (with some duplication). Enjoy the posts. 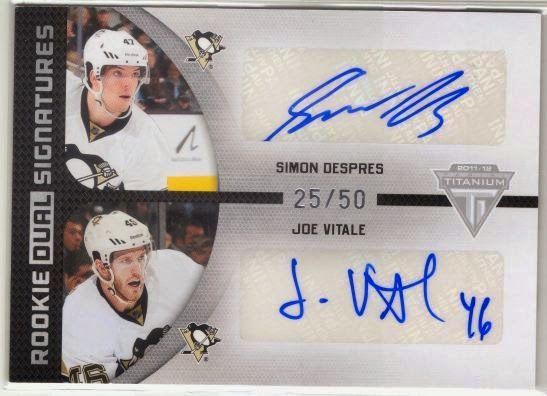 Despite the fact that I have had this one lying around for quite sometime, somehow it never made its way to a post.  Until now.  And how fitting considering neither player wears the Pittsburgh sweater any longer.  I'm talking, of course, about Simon Despres and Joe Vitale.

I've posted about Vitale before so I will focus this one on Mr. Despres since at one time, Simon was supposed to be the next big thing on D in Pittsburgh.

Despres was the Penguins first round draft pick in the 2009 NHL Entry Draft.  He was a powerhouse in the AHL and was considered by many in the Pens organization to be a top-four defenseman.  But when he made his way to the NHL, the Pens didn't get the production they were expecting.  Instead, he was relegated to a third line pairing and sometimes even a fourth-liner.  His reserved nature made him one of the quietest in the Pens locker room but somehow he still managed to win over the crowd and was a fan favorite, including myself.

Then, like most of these tragic stories, his time in Pittsburgh came to an end when Mike Rutherford decided to deal him to the Ducks for former Pen Ben Lovejoy.  If the "win-now" attitude is what this organization has, then I get it.  Otherwise, I will never understand this trade.  Sure Lovejoy has tweaked his game and is a reliable D-man that plays his zone very well and isn't prone to mistakes.  But Despres is young and his game has to mature.  His errant passes, poor decision making, and dumb penalties will eventually go away in a year or two with experience.  Lovejoy is getting up there in age and will most likely not be back in the Pens jersey going forward.  I see way more long-term upside in Despres.  I hope he does well with Anaheim and I wish him the best.

This card comes from the 2011-12 Panini Titanium issue.  It is from the Rookie Dual Signature set and is serial numbered #/50.  These are both sticker autos signed in blue ink.  Vitale uses his jersey number on his signatures and his name is easily recognized.  Despres...not so much.
Posted by dogfacedgremlin at 1:45 PM

Check out my Original Blogs